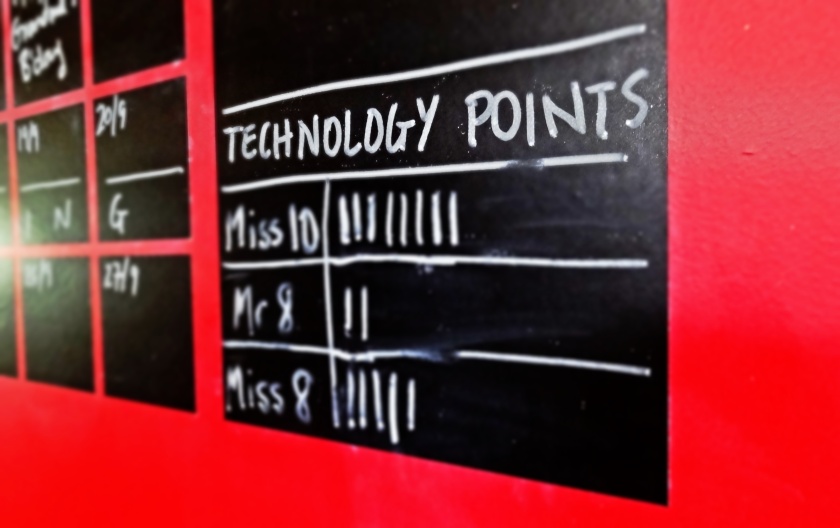 In my Parents Guide to Pocket Money I mentioned that it’s not always a good idea to attach pocket money to chores. It’s just too easy for kids to refuse to do chores because they either don’t yet value money, or don’t have an immediate need for it – leaving you frustrated and with more things to do!

You’ll still need a way of incentivising the kids to do what needs to be done. If it’s not going to be with money, then the best idea is to create a second form of currency which can be earned.

Use the things your kids value the most

Figuring out what incentives to offer in return for doing chores is easy – just find the things your kids value the most. In our house that would be access to technology, but it could just as easily be treats, play dates, sleepovers, or all of the above or anything else you think will work.

Once you’ve worked out what the incentive will be, you’ll need to create a currency.

In our house we give out Technology Points which can each be redeemed for 10 minutes of play time on the iPad or computer (as opposed to the access they need to do homework).

The value you give each point will depend on how many points it’s possible for them to earn each day. For example, if you want to limit technology to 30 minutes a day, then make it easy to earn those points, but more challenging to earn more.

The next step is to set the rules.

As the system becomes more embedded, the kids get older and expectations change you can revise the rules. For example – at first you might want to reward the kids for getting themselves ready for school on time – but once this becomes something they do as a matter of course you can take this off the list and replace with some other behaviour that needs changing.

If you like to run a democracy, you can even sit the kids down from time to time and review/debate/negotiate what’s on the list and how many ‘points’ each chore is worth. It’s also a great opportunity to reiterate expectations and agree on new chores to be added to the list.

A simple chart will make it really clear exactly which chores will earn them rewards.

You’ll be constantly adding points as they are earned and taking them away when they’re redeemed so whatever system you use – marbles in a jar, marks on a chalkboard or a fancy app – make sure it’s easy and manageable.

Rewards should be paid out once chores are completed (to your satisfaction), but you can also take them away if chores aren’t completed on time.

When setting the rules for your house, consider what the penalty is for chores that aren’t done. Depending on the personality of your child/ren it may need to be harsher than simply not earning that point

For example: Miss 8 refuses to set the table even though it’s her night to do so. Not only does she not earn a point, she also gets one taken away. During one particularly stubborn streak we even had a child on negative points which meant a ban on all privileges. Let me just say, there’s nothing like only two out of three kids being allowed a bun from the bakery to get an errant 8 year old back on track with their chores.

Read more about why linking chores with pocket money isn’t a good idea in my Parents Guide to Pocket Money.

Not sure I'd have embarked on this single use plastic free thing if it meant having to give up my favourite weekend tipple 🍺 And now with @garageproject just around the corner we can even refill our own bottles - which ticks the #wastefree box 😍 #bonus #refillnotlandfill #refillrevolution #beer #garageproject #craftbeer #savetheplanet #onebeeratatime
The teens are very happy that crisps are back on the menu in our house with these @propercrisps compostable bags. It's a great reason to choose this brand in the supermarket aisle as a #simpleswap but they're not the cheap option for those on a budget. Still, it all has to start somewhere and maybe one day this type of packaging will be the norm. . . . #compostablepackaging #crisps #propercrisps #consciousconsumer #propercrisps
Oh hi little one. Time to head to your forever home. . #sanctuarymountain #maungatautari #kiwirelease #kiwi #kiwichick
Its birthday month at our place so that means lots of birthday experiences #givepresence. This one is going to e very cool. . Today we're releasing a baby kiwi into the wild. 🐣 . #sanctuarymountain #kiwi #kiwirelease #maungatautari #collectmoments #happybirthday
Great to see businesses this king differently - like this nursery that packages its vegetable seedlings in old newspaper. I found these at @bunningsnz. #simpleswaps . . . #plasticfreeveges #plasticfreeveges #gardening #saladgreens #growyourown #growyourownfood #sustainablebusiness #plasticfreegardening #reducereuserecyle
If you think making small changes isn't enough, then here's proof that it is! . While switching to shampoo bars didn't feel like a big deal, being personally responsible for saving 70 plastic bottles from being manufactured and disposed of last year - and being a part of the 3.3 million plastic bottles @ethiqueworld prevented from entering our ecosystem - is. . At least I think so. . . . #simpleswaps #smallsteps #reducenotrecycle #ethique #shampoobars #plasticfree #plasticfreeliving #consciousconsumer #nosingleuseplastic #noplasticbottles #yayme #smallchanges #smallchangesbigresults #justdoit