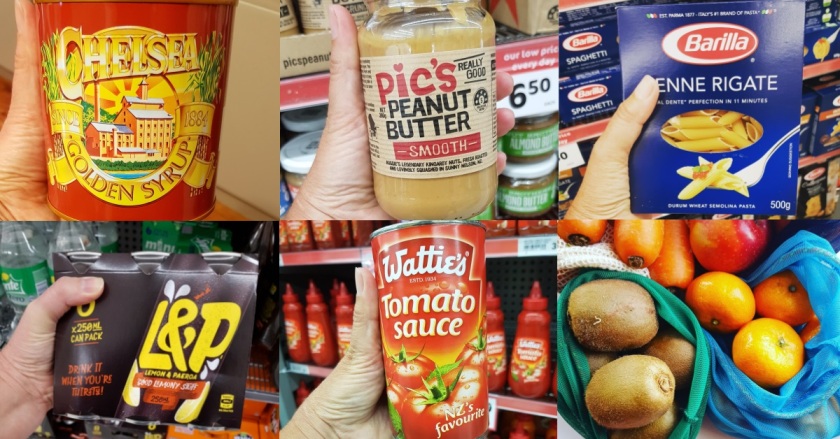 This month – for Plastic Free July – I’ve been focusing on eliminating as much plastic as possible from my grocery shop.

Taking my own shopping bags is a no-brainer – and that includes reusable produce and bulk bin bags. But I’ve also been seeing how many #simpleswaps I can make by choosing everyday items packaged in tin, glass or cardboard rather than plastic.

I’ve found quite a few (check out the album on Facebook), but while I’m trying to save the planet I also need to stay within a pretty tight household budget.

So I decided to see how saving the planet by choosing to refuse as much plastic packaging as possible stacked up on price during my grocery shops at Countdown.

But before we start, let me just make a couple of things clear.

Yes, I know I could shop at a cheaper supermarket, but Countdown is the only supermarket within cooee of where I live. I do also use a refillery but the closest one to me is a 15km round trip which I only do once a month – so sometimes I need to top up supplies in between times.

My comparisons are also based solely on price. I haven’t taken quality or nutritional value into account as that would require way more investigative skills than I possess. I’ve also compared prices based on a cost per unit – mls, grams etc – to get around the fact that products come in lots of shapes and sizes which can make them harder to compare.

Now that we’ve got that out of the way, here’s what I discovered.

The biggest offender on my shopping list was fizzy drink. Fizzy in a plastic bottle can be as cheap as $0.07/100mls but if you buy it in cans packaged in cardboard it works out at $0.34/100ml – that’s almost five times the price! Thankfully it’s not a staple in our household – reserved for special occasions and parties only – but because we had a party in July it was on my list.

Peanut butter, on the other hand, is an everyday staple in our pantry. I could have bought it in a plastic tub for around $0.61/100gms but in a glass jar, it’s almost three times the price. That’s why I usually make my own at Bin Inn, but next time I’ll need to remember to take two jars!

I also found Vegemite, which comes in a glass jar (albeit with a plastic lid) to be more expensive than it’s rival Marmite.

Mayonnaise is another product that’s on the expensive list. In a plastic tub it’s around $0.43/100gm but when you buy it in a glass jar, it’ll cost more than twice the price at $1.05/100gms.

The pasta I found in a cardboard box is slightly more expensive than the fully plastic wrapped alternative at $0.50/100gms vs $0.44, and it still has a small plastic window which I need to remember to remove and recycle separately.

Amazingly, some fruit and vegetables are cheaper when pre-packaged. I bought carrots in my reusable produce bag for $2.49/kg when I could have bought them packed in plastic for $2/kg. Outrageous.

What costs about the same

I was surprised to find that my #simpleswap juice option was quite cost-effective. I buy the Barkers juice concentrate which, when made up to the recommended 1 part concentrate to 6 parts water, works out at $0.15 per 100ml – roughly the same price as buying juice in big 3L plastic bottles (which works out at $0.13 to $0.17 per 100mls). Nice!

Tomato Sauce is also much of a muchness. The sauce refill I bought in a tin cost $0.26/100gm which is about the same as the bit plastic refill bottle I used to buy for $0.25/100gm.

Baking paper was a bit of a surprise. A roll packaged in cardboard worked out at $0.24/m when the cheapest refill roll, which comes encased in plastic, cost $0.42/m.

Tin foil was the same. It cost me $0.10/m in a cardboard box yet the cheapest refill was over three times the price at $0.35/m.

A lot of unpackaged fruit and vegetables are cheaper than the plastic packed options. A whole pumpkin worked out at $1.66/kg when it’s pre-cut and plastic wrapped alternative came in at a whopping $2.49/kg.

Pears, apples, carrots and potatoes and onions were all – unsurprisingly – cheaper bought loose than pre-packaged.

So what does it all mean?

There are still lots (and lots, and lots) of products at my local Countdown that don’t offer plastic-free packaging alternatives – like biscuits, crackers, rice and more.

But where plastic free options were offered, there were enough affordable options to make at least some #simpleswaps a more permanent choice.

I can’t help thinking that if we all committed to making a few #simpleswaps – even just the super affordable ones – it might send a message to manufacturers that plastic-free packaging is what we want.

Because it’s us – the consumers, the household shoppers – that control the money those manufacturers need to keep their businesses going.

If enough of us put our money where our mouth is – and our heart is – surely change will come.