There are plenty of places in Auckland where you can have a fun ‘family day out’, but there was something about Whoa! Studios that seemed different to the rest. Despite my concerns that it would be too young to impress my three tweenagers, we bundled ourselves into the car on a warm and sunny January day and headed out West to give this experience a try.

We booked in advance for a show on 11am on a Saturday. We had a few technical issues booking online, but these were sorted out very quickly with some outstanding customer service.

I can see why it’s called Whoa! As we pulled into the carpark it’s what all four of us said. This looks like nothing we’ve seen in NZ before. Slick, cool and lots of fun.

We arrived around 10.30 so we could get organised, and the kids could hit the playground before the show.

The entrance way to the show is impressive – decked out like a huge theatre with chandeliers and a red carpet. Some of the cast here on hand to entertain the kids as we queued – which wasn’t for long.

There was another Whoa! as we entered the theatre. The set is pretty impressive, and it wasn’t long before the show was underway. Any concerns I had about it being too young for my lot quickly disappeared as they were completely enthralled right from the start. The show is done in pantomime style using a mix of human actors, puppets and audio visuals with enough audience interaction to keep the kids engaged and jokes to get a giggle or two from the adults. Some of the very little kids got spooked by wanna-be villain of the year Dr Gloom – but he’s really not that scary at all. 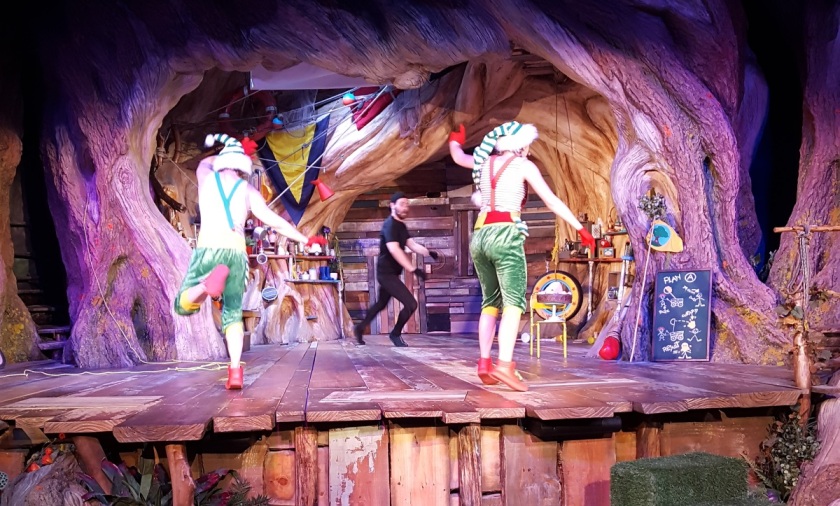 The show runs for a good 45 minutes and at no point did we wish it was over. We were completely entertained right until the end, when the crew took the opportunity to spruik their up and coming movie – Custards World – which is currently in production.

The whole thing is slick and professional and hands down one of the best kids theatre experiences we’ve had.

As VIP members we got to go behind the scenes after the show. The kids got to sit in the Gloom Mobile and got a very quick tour of other parts of the set by Adam Fresco – one of the writers of the show and the movie. The tour did feel a bit rushed and once over lightly, but was interesting and the kids seemed to enjoy it. Let’s hope there is more on offer over the coming year for the $139 that we invested in the VIP pass.

Next up, lunch in The Grounds Eatery – the new venture by celebrity chef Ben Bayly. We put our name down for a table and were seated within 15 minutes. The menu is extremely well priced – where else can you get a bowl of kids spaghetti bolognaise for just $6. Grown up dishes range from $12-14 for a snack plate (I can recommend the Hapuka pancakes) through to $16-29 for a larger meal. The food was delicious, and we were kept enthralled by the wide-open kitchen – it was like watching an episode of My Kitchen Rules and then being able to try the food!

Of course the kids had already spied the Ice Pop Shop – so that was our next stop. They were delicious and refreshing, but perhaps more suited to a grown-up palette.

It was lovely to see a few touches put in place to limit waste – like made-on-site juices solid in little glass bottles that could be re-used.

The playground was a complete winner – especially the crochet net. The kids crawled, climbed and swung their way around that thing for hours on end. The rest of the playground is also very slick and fun – and the little hessian sacks to go faster down the slide were a nice touch. While my kids were probably the oldest there, and a lot of the playground structures are suited for kids younger than them, it still kept them entertained for a good couple of hours. There are plenty of benches for adults to sit on while the kids play, but not a lot of shade to be had.

Book your show tickets in advance. While there are walk up tickets available now, I suspect as word gets around the shows will definitely start to sell out, especially in the weekend.

Plan to spend the day. There’s plenty there to keep the kids entertained and the food is reasonably priced. There didn’t seem to be any restriction on taking your own food and drink either, but you may struggle to find somewhere shady enough to sit and eat it.

Sunscreen and a hat. There’s not a lot of shade in the playground or the seating areas around it.

A healthy appetite. The food is delicious and not too expensive for the quality that is being served.

Your sense of fun, so you can yell ‘behind you’ at all the right times, help to spot arch-villain Dr Gloom and take part in the sing along at the end.

We chose and paid for this experience ourselves, so the opinions in this review are my own without any input from the experience organisers.